It's been awhile since my last post. I'm afraid I won't be getting anymore pockets done. The thickness of the denim was really hard on my fingers. Instead, I have been working with Lacy's stiff stuff and loving it. I have one framed and 8 others finished. Soooo much easier on my fingers.

I have been having other issues to deal with also. My two loveable Yorkies are having deathmatches! I'm having a really hard time dealing with the whole latching on and not letting go and worrying about when the next attack will be. Very depressing. I've also been going through a really tough time. Still dealing with divorce issues - as in trying to move on and not being able to get passed the whole 'I'm divorced' thing. I miss my husband, I miss being close to someone and having a reason to live - to get up every morning and make the daily drudgery worthwhile. Right now nothing is worth the pain and nothing I have right now is worth any of it. I am hanging on because of my kids, but realize that my kids can do fine without me. I guess I don't really have much to live for anymore. I don't get emails other than junk mail, no friends emailing to chat, no phone calls - so why do I have any phones I wonder. And I have 3. I'm just wasting space, money and air.

I think about suicide every day. My friend says I am too up and down, but I'm not, I just try to fake it and do a poor job of it sometimes. I tried being honest to myself and my feelings but no one wants to deal with all that, so I went back to pretending everything was spiffy.

When people wonder why other people choose death over life, I say walk a mile in their shoes. Everything I ever felt was worth anything in my life was tied to my being a wife and a mother. The kids are grown and my husband left me after having several affairs - affairs I would have and did forgive him for one of them - I never got the chance to forgive him for the second. He just wanted me out of his life. I feel like it's my fault for some reason. That I am unloveable and worthless. I know that's not true, but it's hard when I look at my life and see all the times I was left behind, unwanted and rejected. I'm tired of being rejected, of feeling unloveable.
Posted by beadingprincess at 5:05 PM 2 comments:

With the New Year upon us

I'd like to say I am only 2 months behind in actual work and need to upload photos for september and october. Which may not be done any time soon. Between trying to get the house back together and getting ready for a new year I don't seem to have energy left over. But I would like to get back to beading regularly and I am making that a priority when I'm not reading, eating, cleaning, or sleeping.
Posted by beadingprincess at 7:31 PM No comments:

I keep thinking as the years go by that things would get easier. That I'll remember the good times rather than the bad. That the holidays wouldn't be so hard. Well, so far I haven't reistenached it. I have a hard time listening to love songs, I can't think about Christmas without tears - because I can't be with my family and because my X was having an affair during our last Christmas together. We were at my son's and he kept disappearing to call her and she was constantly calling him. That's kind of when I knew something was really wrong. I suspected but he denied it. I keep thinking I'm over it and then it hits me all over again, sometimes worse than others.
Posted by beadingprincess at 10:03 PM No comments:

August and September are done but I haven't had much computer time here at mom's. (She is doing fine, frustrated she isn't progressing as fast as she wanted to but is improving daily) I have been trying to bead a little every day. I just finished August so am behind a bit. I am working on another pocket while waiting for my bead order to come. I used up most of the flower beads I had on the last pocket. Glass beads shaped like flowers are hard to find (for me at least) so I had to settle for resin. Ah well. Will post pocket when I get time to photo it and post.

I hope everyone is doing well and happily beading!
kat
Posted by beadingprincess at 1:26 PM No comments: 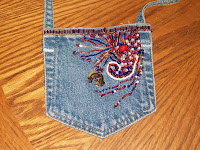 July was in with a bang! My pocket represents just that... all the fun and fireworks of July, the seemingly frantic pace that surrounded us, with everyone going off in different directions. It was a madcap month! I helped my friends with some renovation work for some other friends and flared up my knee, so I had to quit doing that, which I really enjoyed and was bummed I couldn't help anymore. I found I like wielding a saw... lol So half of July was madcap rushing here and there and the other half was perched on the couch with my knee supported and hobbling around. I got a steroid shot and I hate them, but such is life. I did learn the knack of beading while on the couch... so I've been getting a head start on things.... July also is when my divorce was final so there was some sad times too, but I've been seeing a really good counselor so I'm working through it. All in all, my mental health is better than it was this time last year, my physical self is in the toilet... arghhhh but what can you do? Day to day....
Posted by beadingprincess at 6:26 PM 1 comment: 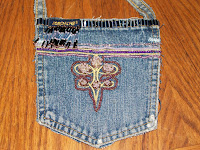 June is done... fairly easy pocket this time. I followed the image already on the pocket and did some fill-in with beads. I felt 'compelled' to do this pocket and it was a challenge and fun too. Just beading to be beading, but I guess it shows some of my contentment and settling in to the new life of being single. I added straps to all my pockets and found out it was easier to add them before I beaded, but a little trickier to bead with the strap in the way. Anyway this one is just whimsical and fun...
Posted by beadingprincess at 6:21 PM 1 comment: 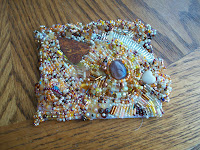 I've been working on this for awhile and finally finished it in July. It's mostly just my mix of beads - my study in golds... lol I recently finished my study in pastels and I am working on my study in purples. Totally freestyle - no pattern or end result... just beading with colors and creating art. This and the others were all done on the same stuff that Jody (my friend here in NM) uses in her beaded goddess's. Stiff stuff or something like that. Very easy to use and it takes a wash of color nicely also which I did for the purple piece. I am thinking I will frame these after I figure out how I'm going to do the matting - material or paper? quilt it or flat? ughhhh
Posted by beadingprincess at 6:14 PM 1 comment: 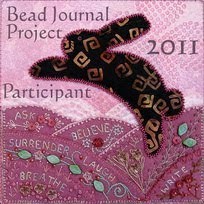